The other day a group of us headed to one of the oldest and most popular markets in Kuwait City called Souk al Jumma, or commonly know as The Friday Market.  This place is a HUGE open-air market that is only open on the weekends.  There are hundreds of vendors who sell just about anything you can imagine, including clothing, rugs, electronics, furniture, toys, antiques, tools, plants, and apparently even animals!  (We didn’t make it to the animal section, but apparently it is not a place for the faint of heart) You would need an entire weekend to walk through the whole place, and it’s highly likely that you would still miss something! 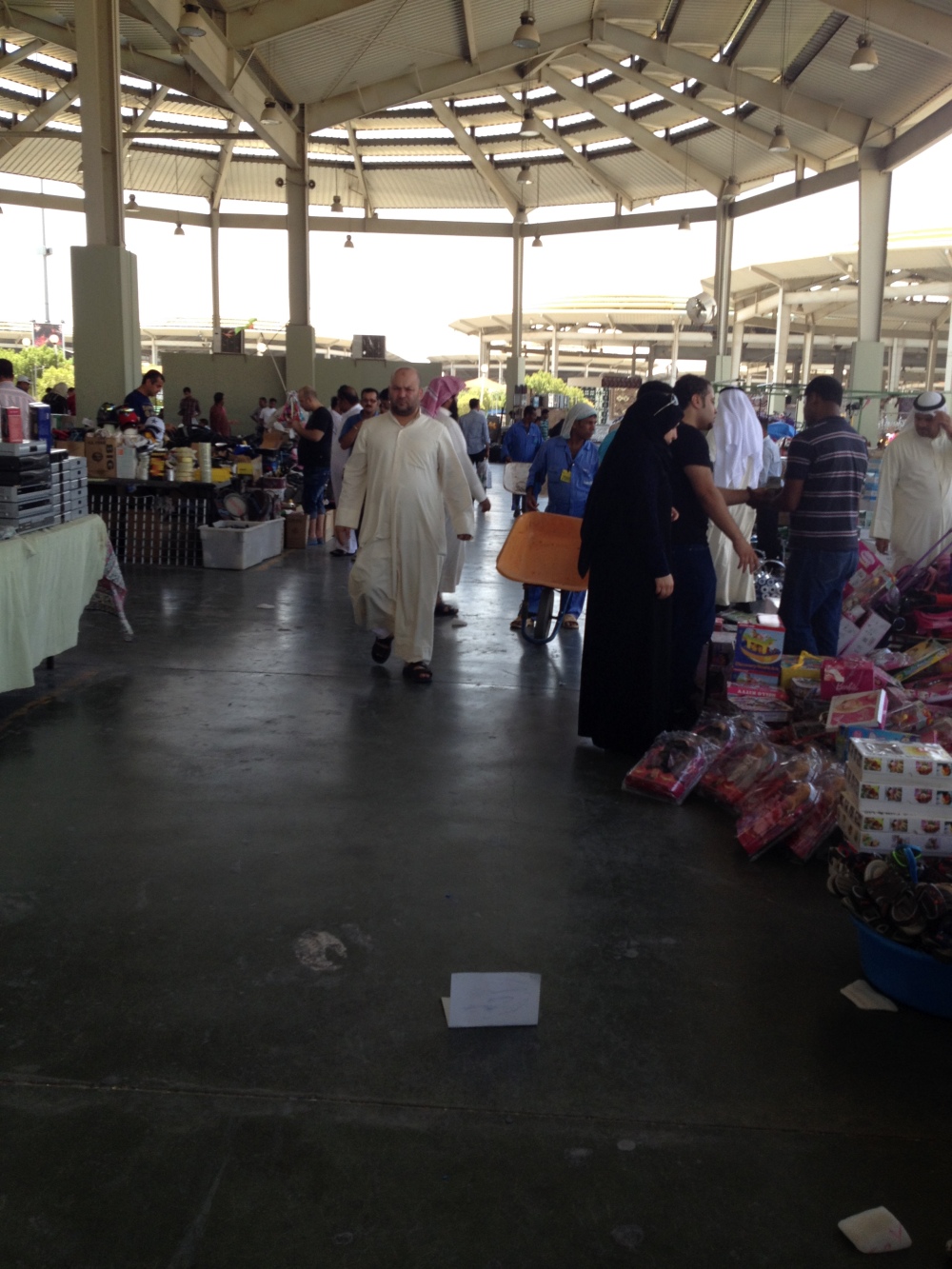 This is the view inside one of the shelters. There was over a dozen of them, and each one is bigger than a football field!

It’s an outdoor market, and even though all of the vendors are covered by sun shelters, it was an  typical day in Kuwait when we went.  Our plan was to walk through as many vendors as possible, then when we started feeling light headed, just before we thought we were going to pass out from the heat, we would run inside the adjacent grocery store and cool off in their air conditioning.  We would continue this cycle as many times as possible, before we would surrender to the intense heat.  We didn’t have a “To Buy List” in mind for the market, we just wanted to do a bit of exploring and experience as much of the Friday Market as possible (except the animal section!)  Perhaps the coolest thing about The Friday Market is that all of the prices were super reasonable, and bartering is not only recommended, but extremely encouraged.  There’s not many things that I love more than a good deal, so I was super pumped to do some “wheelin & dealin”

It wasn’t long into our exploration of The Friday Market before my eye caught something familiar . . . . a Minnesota Vikings jersey!  As one of the Vikings’ biggest fans, I was super pumped about my find!  I walked a bit closer and realized it was a #84 – Randy Moss jersey.  The guy hasn’t played for the Vikings since 2004 (besides that weird stint in 2010) but he’s always been one of my favorite players. In fact, I still remember my 16th birthday present in 1998, when my parent’s bought me a Randy Moss jersey during his rookie season.  I don’t know what ever happened to that jersey from 15 years ago, so I knew it was time for me to get a new one. Plus – I realized I needed something to wear during the Viking games. I really wanted this jersey, so I began executing Stage 1 of my ‘wheeling & dealin’ plan! 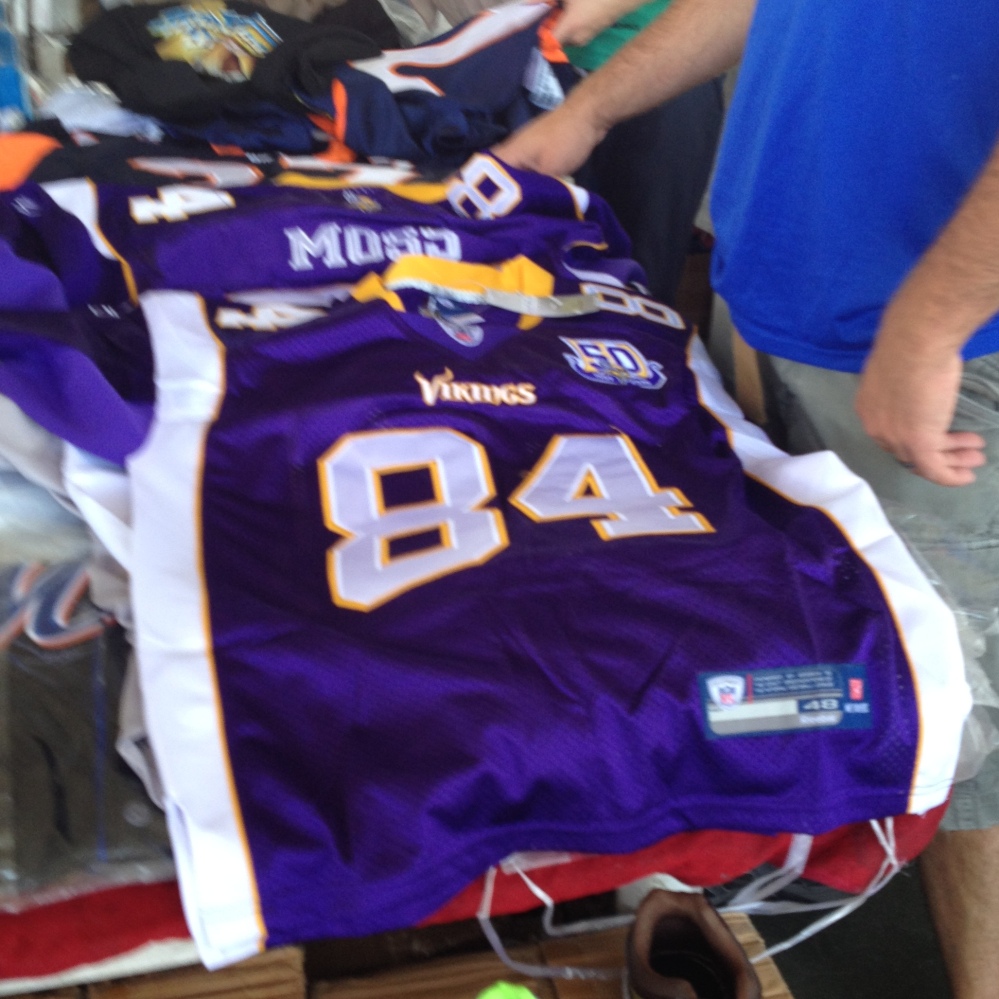 Look what I found!!!

Even though I was super excited about my find, you never want the salesman to see it because then he knows you will pay any price for it.  Therefore I pretended to look at the other merchandise he had for sale, and then “stumbled” into the jersey.

Stage 2 – Laugh at the Price

About 30 minutes later, on our way to the grocery store to cool off in the air conditioning, I decided to purposefully walk by the jersey again.  I reminded the guy that I would pay 1.000KD ($3.50) for it, but he said no, so we just kept walking.

About an hour or so later, I did another one of my purposeful “walk byes.”  This time though, I just held up 1.000KD in cash and kept on walking.  I made eye contact with the guy, but he never initiateded conversation with me. All I could think was, “damn, this guy is good.” It was time to break out Stage 6.

Usually Step 5 seals the deal, so I was bit nervous during this stage based on my inexperience at this level.  I knew I had the guy wrapped around my finger though, so we could get the deal done.  I went back for a THIRD time, and approached the vendor with cash in hand. I decided to up my offer to 1.500KD ($5.00) and explained to him that this was my final offer. He said the lowest he could do was 1.750KD ($6.00).  We were within $1.00 for the jersey, but I was not going any higher!  After a brief discussion, we both realized that neither of us was going to budge on our offers.  With that being said, I decided to walk away WITHOUT the jersey! 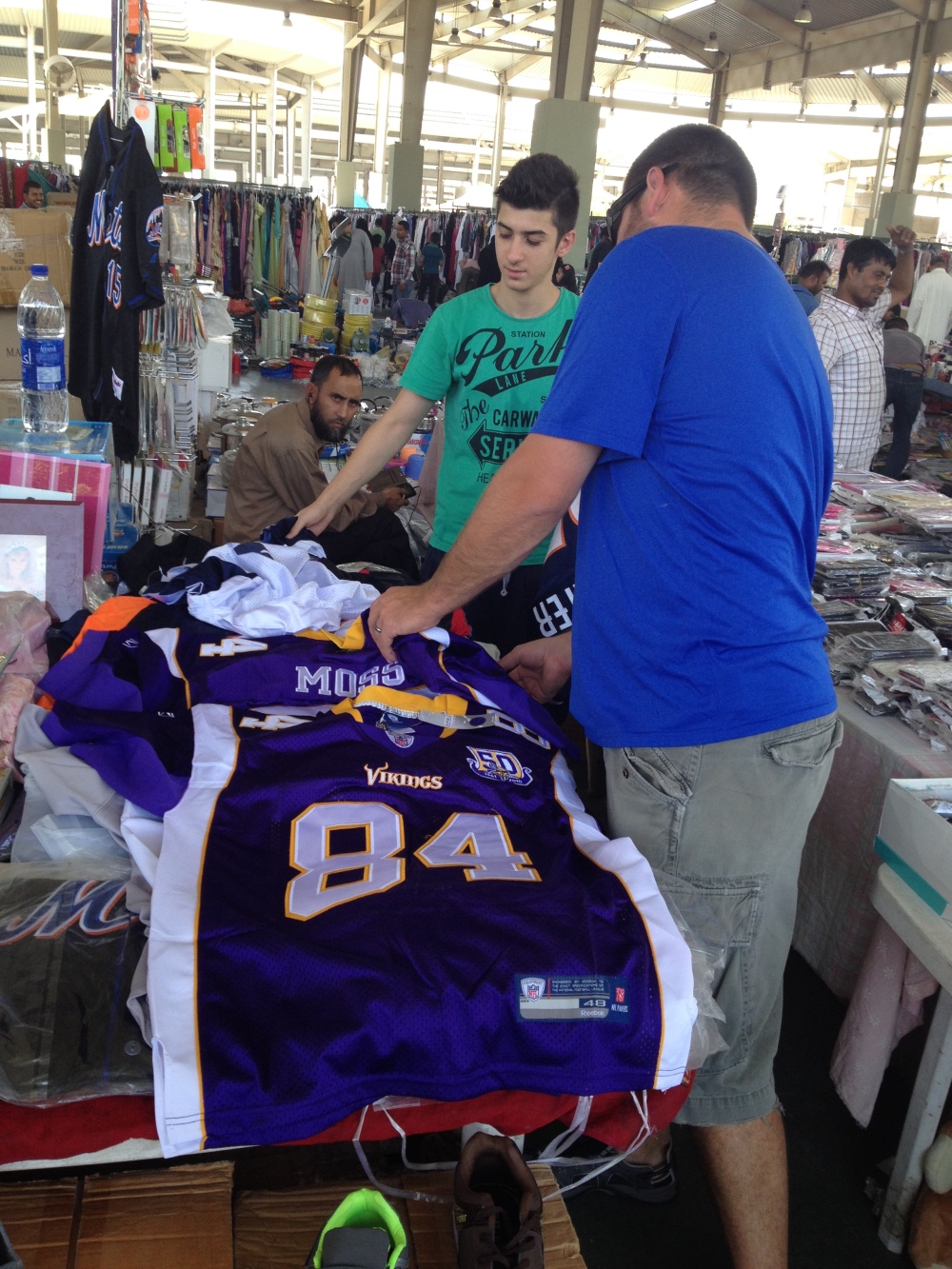 The final negotiations during Stage 6 – The Hail Mary

As much as I wanted the jersey, I wanted to win the negotiating battle even more!  I love the thrill of the hunt and in this case I lost the prize.  He was the more experienced negotiator, or perhaps he knew there was someone else in Kuwait who would buy the vintage Randy Moss jersey from him.  When we go back in a few weeks, maybe he will still be there trying to sell the jersey!

Throughout this whole process, we had a ton of fun at The Friday Market.  We can’t wait to go back later this winter when the weather cools down, and we can explore the market without sweat running into our eyes, causing an uncomfortable burning sensation!  It was fun to just look at the wide variety of merchandise that people were selling, and watching all of the wheelin’ and dealin’ that was going on! 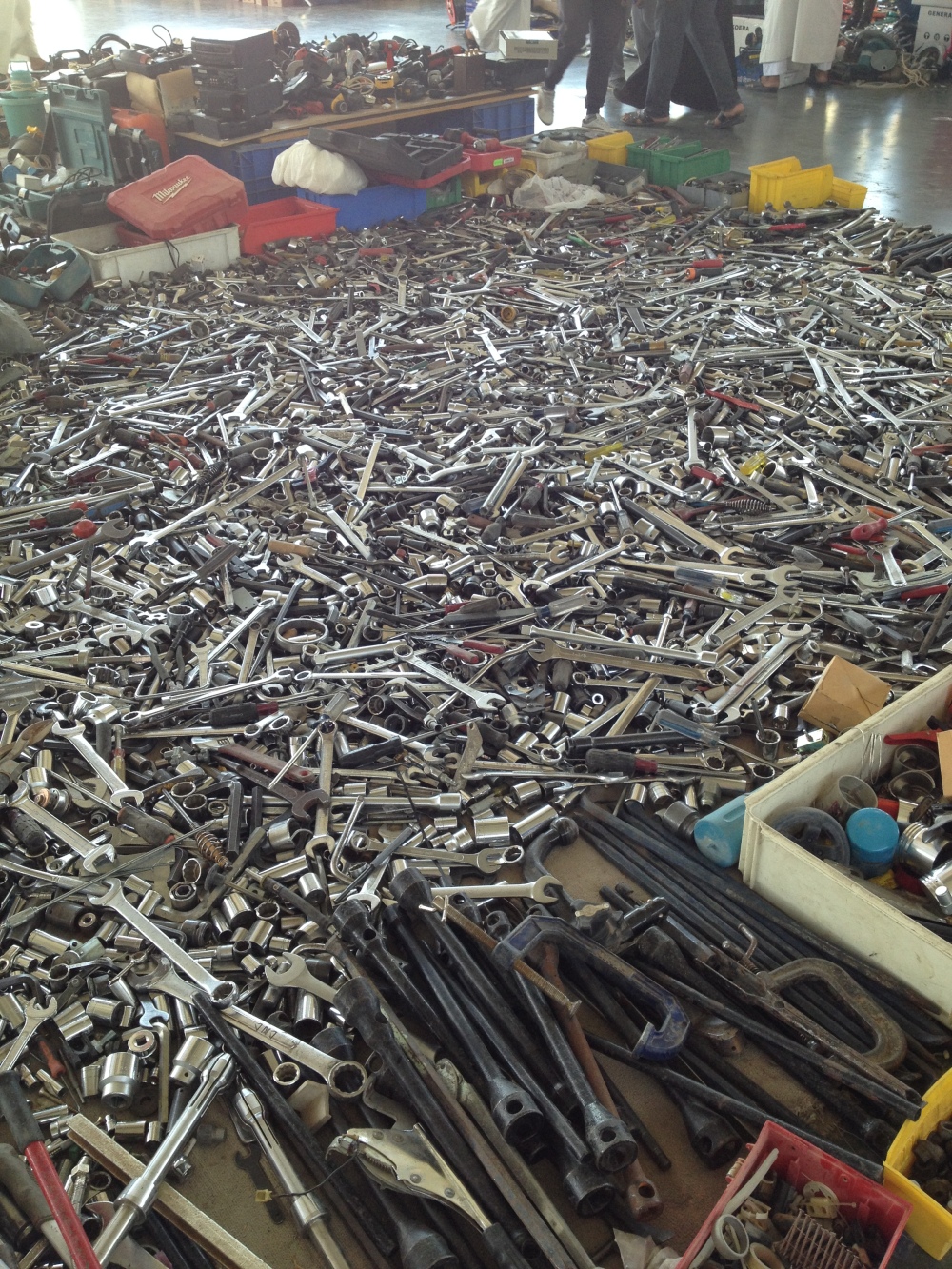 This vendor was selling various tools, and hundreds of sockets! Could you imagine digging through that pile looking for a 7/16″ socket!