We had a blast during our vacation last week to Dubai and Abu Dhabi. The trip was full of great times, new adventures, and lasting memories.  One of the highlights of our trip (for  me) was attending a soccer match between the United Arab Emirates and Australia!

Before our trip, I was pumped when I found out about the match.  It was just a friendly match between the two countries, as they both prepared to play in the upcoming Asia Cup in January.  I was excited to experience the atmosphere, huge crowds, team chants, and the pride the crowd had for their home countries. Needless to say, it wasn’t like that at all.  The atmosphere was more like a high school soccer game. 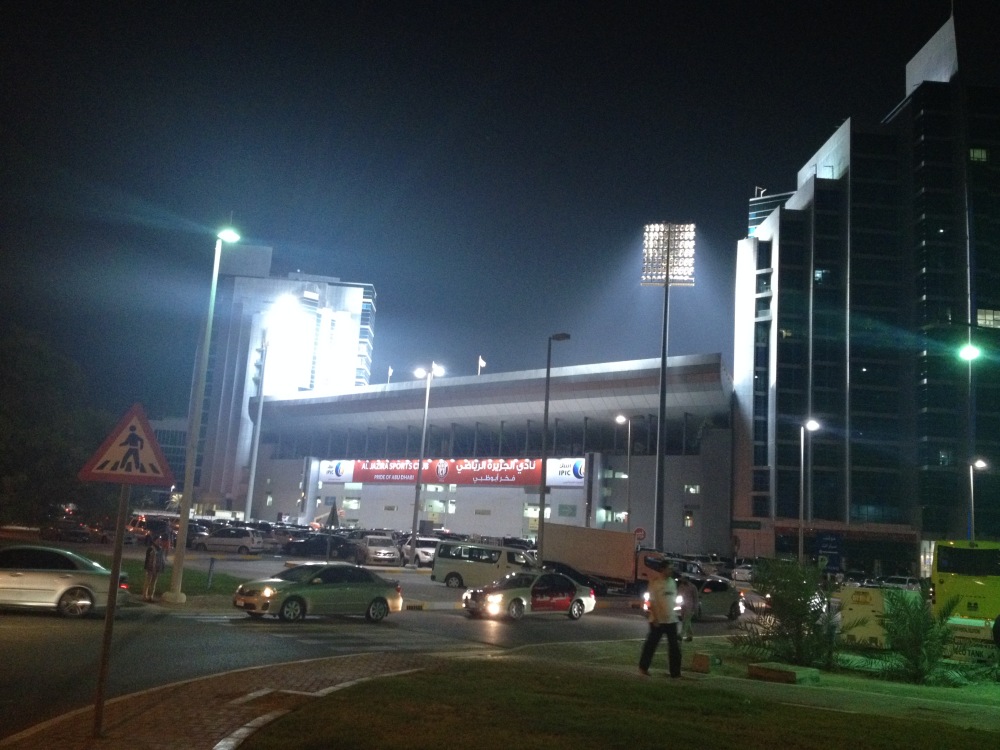 When we arrived to the stadium, I was a bit confused to find out that you didn’t even need a ticket for the game. It was FREE to attend!  We tried entering the first gate we saw, but were denied entry by the security guards. They pointed further down the plaza, so I assumed we were just at the wrong gate. We then realized that even though we weren’t from Australia, we were being ushered down to the visitors entrance.  The security guards just assumed that since we were caucasian, we were rooting for the Aussies. No worries though, we were visitors in another country, so we just followed along.

When we made it into the stadium, I was surprised to see so many fans from Australia. Their designated “visitors” section was completely packed, and we struggled to find 2 empty seats. Eventually they had to open up additional sections for the Aussie fans because there were so many of them! I thought it was funny that they were restricted to their seat choices, because the entire stadium was empty! I think the capacity for the stadium was about 40,000 fans, however there was only about 1,500 people in the entire place! I would say about 3/4 of the people there were rooting for Australia, hardly any UAE fans were there.

A panoramic photo take from my iPhone. Rachel wore her sunglasses during the entire game because the stadium lights were blasting us in the face.

Since the stadium was so empty, the atmosphere was pretty lame. Here you had this huge stadium, but you could hear a pin drop because it was so quiet. Once-in-while the Aussie fans would chant, “Aussie Aussie Aussie, Oye Oye Oye.” I chuckled and participated since I was an adopted Aussie fan for the game. I blame the nonexistence of booze at the game for the boring atmosphere. There weren’t any other team chants or singing. The game was also a 0-0 draw, so no cheering after a goal was scored. However, we did see a bunch of guys take a “dive” and fake an injury!!! We actually made a drinking game out of it! Every time someone would fake an injury, we had to “drink.” However, since there was no booze there we decided to save our drinks for next summer when we return to the states for a few months. If we buy about 3 cases of beer, we should have enough to take a drink for each of the fake injuries! 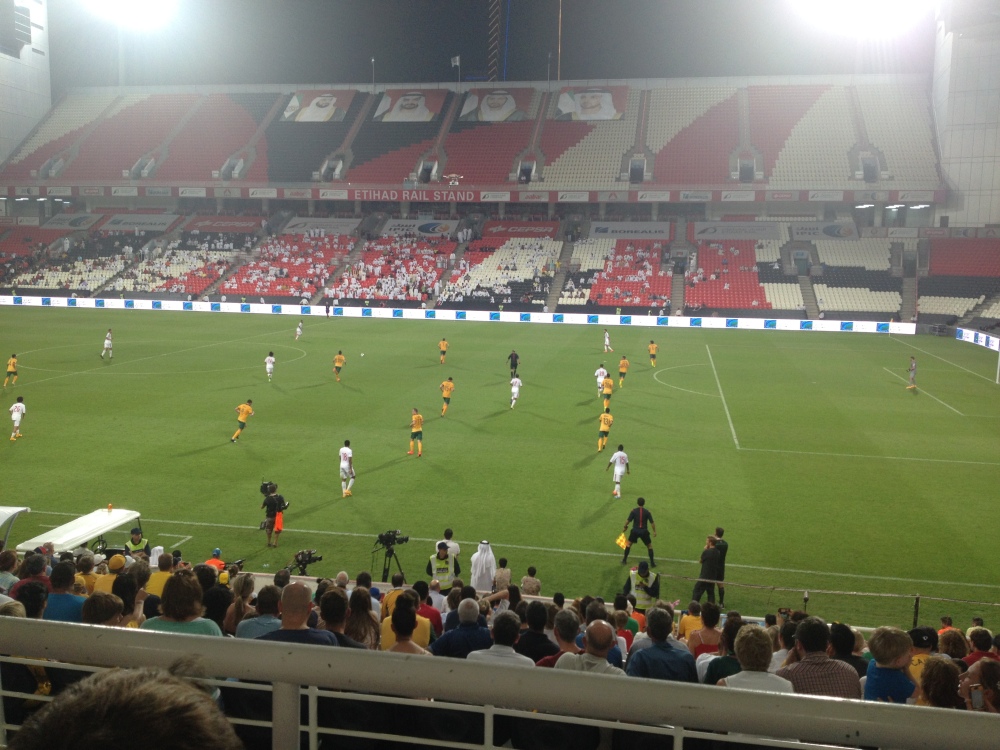 We had great seats and it was so nice to see GREEN GRASS!

I also got a chuckle out of the concession stand at the stadium. Any drink you ordered, they would pour it into a tiny plastic cup, and it only costs like $0.25 (for water, pop, juice, etc.) If you wanted to order a snack, it was always a roll of the dice on what they would have. The first time we went up there, they didn’t have any snacks. Then like 20 minutes later we saw people walking around with popcorn. However by the time we got to the concession stand, they were sold out. Then a little while later they were selling small bags of sunflower seeds (unsalted, yuck!). Then about a half an hour later they were selling little bags of potato chips. I have no idea where they were coming up with this food, but it almost seemed like some dude was running back-and-forth from the grocery store buying whatever he could find. It was absolutely hilarious! I kept waiting for him to show up with a stick of bacon or sausage, but he never did.

Trying to “zoom in” with my crappy iPhone 4s.

Overall though, we had a great night at the game celebrating my birthday! We were able to cross something off my “sports fan bucket list” by attending an international soccer game. I’d still like to attend a big match in Europe or ultimately a World Cup game to experience the true atmosphere of a game.