I did something this weekend I only dreamed would happen during our time in Kuwait, I attended a Kuwaiti wedding.  It was such a beautiful and special event full of so much tradition.  There is no way I will be able to paint a picture with my words of how extraordinary it was but I know if I don’t try I will complete regret not sharing some of this amazing event.

How we got invited: Kuwaitis are known for being very hospitable but it still took me by complete surprise that on Thursday when my friend Jooles meet the mother of one of her students that she invited her to her daughters wedding….scheduled for the following evening!  Jooles of course did the polite midwestern thing and politely declined.  The Mom followed up with Jooles on Friday morning telling her how she really would love to show her a traditional Kuwaiti celebration and told her that she was more than welcome to invite a few friends, enter Niamh and Rachel! 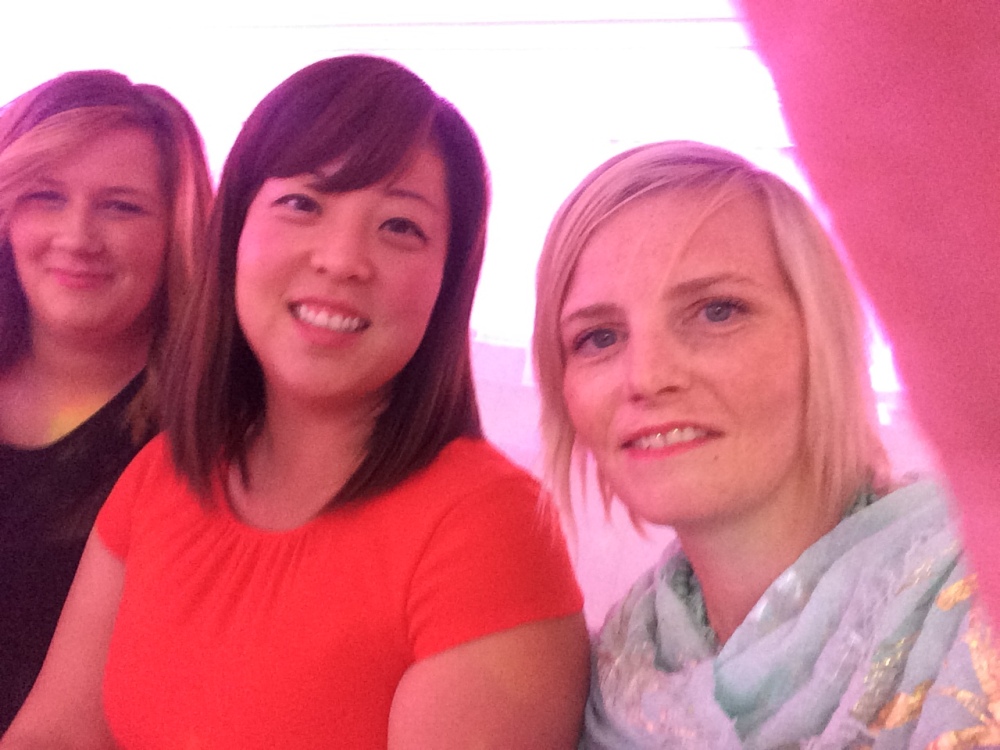 What to wear: When Jooles texted on the morning of the wedding and asked if I wanted to go with her, I of course had a typical girl melt down, what do I wear?

Jen is a returning expat and has become our own personal Kuwaiti Encycoldia, she has been unbelievable helpful so if Jen says go fancy, we have to go fancy!

I knew I needed to put together a fancy outfit but here in lies the problem, I just moved to the desert to teach, and only had clothes that were suitable for circle time and recess duty. If teachers are nothing else though they are resourceful so somehow in my stash of cardigans and denim jumpers covered in apple appliqués I found a black dress, black heels, some tights, and a black scarf to cover my hair and shoulders if I needed to be more conservative.

Driver: The fabulous Kuwaiti hospitality jumped into affect once again as it was time to leave for the wedding.  The mother of the bride sent a driver for us  (as if she didn’t have anything else to think about, on the day her daughter was getting married.) Having a driver is a pretty typical thing here in Kuwait, Mitch and I have a driver in fact, his name is Abdul and he drives a white and yellow taxi cab.  The driver who came to pick us up for the wedding wasn’t in a white and yellow taxi, they were in a black Mercedes. We didn’t realize it at the time but we were his main responsibility for the evening.  He came and picked us up, dropped us off at the wedding and then stood outside and waited for us to be ready to go home…..for 6 hours.

Arrival: We arrived at the wedding at about 8:15 p.m. for a wedding start time of 8:30.  15 minutes early is very typical of how I would arrive to a wedding in the US, but clearly that wasn’t protocol at this Kuwaiti wedding.  We were one of the first to arrive and guests continued to arrived for the next two and half hours.  The bride made her first appearance at 11:00 p.m.

The Fashion: I followed Jen’s advice and went fancy with my clothes (or as fancy as I could scrounge up out of my wardrobe that almost exclusively has clothes from Target in it) however; I was not prepared at all for how significantly under dressed I would be. As the women arrived at the wedding they were wearing their hijabs and abayas but once they entered the ballroom (where it was exclusively women all the men were in a different ballroom having their own party) they uncovered to reveal the most amazing collection of gowns I have ever seen.  There was gold, sequin, hot pink, diamonds, tight dresses, and cleavage.  This party was clearly more than a wedding, it was a fashion show, and the guests were the models.  Every women who walked through the door looked as if she was just about to walk across the stage at the Oscars. 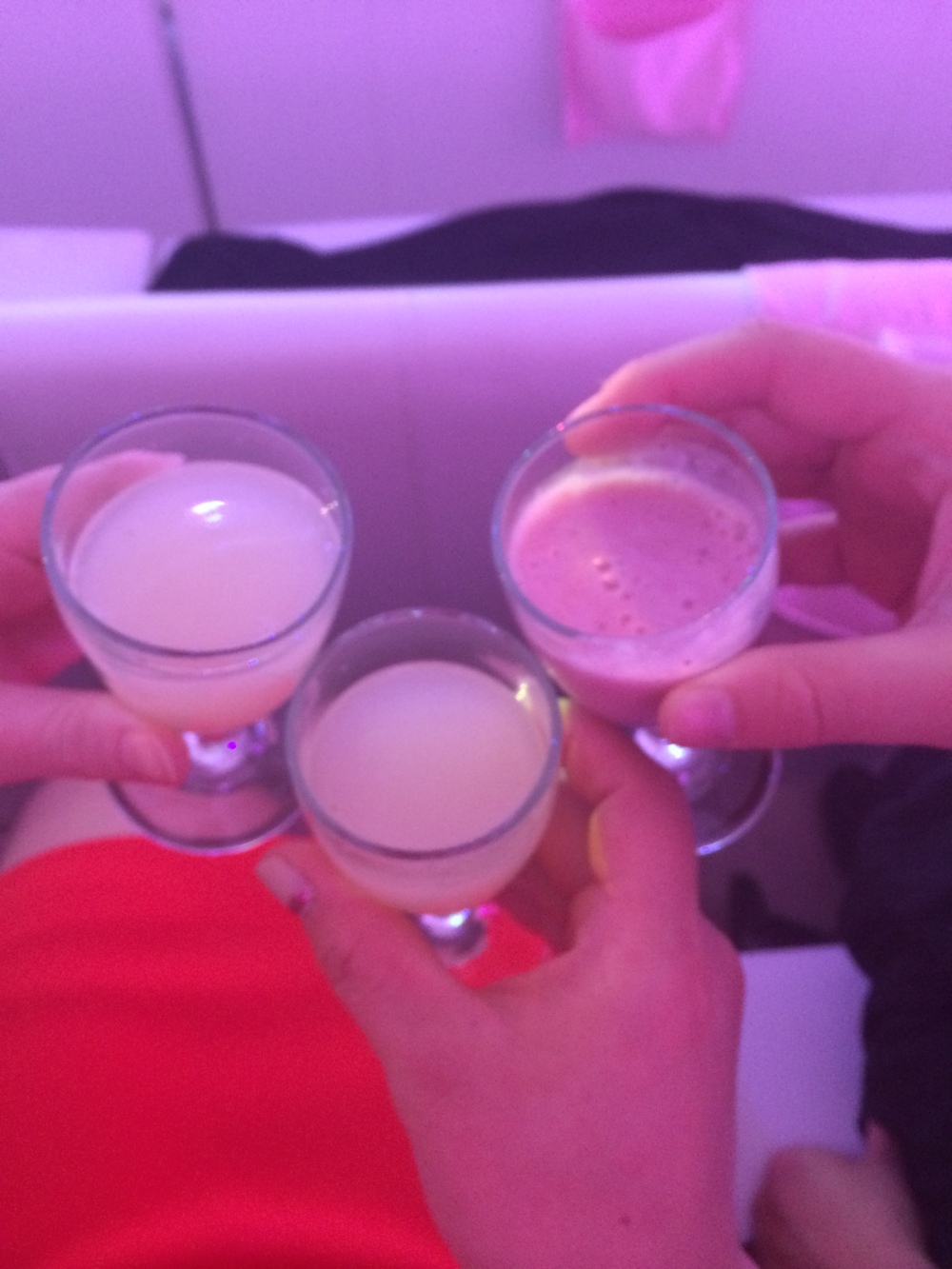 Dancing: I didn’t expect to see any dancing at a Kuwaiti wedding because my understanding was that dancing was against Islamic beliefs, however; the ballroom was arranged with stadium seating couches on either side of the ballroom with the middle of the room left open for dancing. After some reading online it sounds like it is against Islamic beliefs to dance at mixed gender gatherings, since it was only women at this party we got our groove on. It was discovered that I have two left feet on both sides of the Atlantic.

Bride’s Entrance: At 11:00 p.m. we got our first sighting of the bride.  Her grand entrance consisted of her walking across the runway shaped dance floor to the opposite side of the room where a stage was set up with a large couch situated for her to sit on.  Once the bride made her entrance she never moved from that couch again.  People were allowed to walk up to her and get their picture taken with her but she didn’t move again until she exited the party 2 hours later.

Groom’s Entrance: As I mentioned earlier this was a segregated party.  All the men were in one ballroom and all the women were in another.  There was however one part in the evening where some of the men were allowed to enter into the women’s party.   As we were all dancing and have a great time an announcement was made in Arabic, which clearly meant that we didn’t have a clue what was going on, which caused all the women to scurry back to their seats and go from the glitter and glam that was the night to once again fully covered in the black that is their abayas and hijabs.  I still don’t know what the announcement was but I assume it was something along the lines of “quick, cover up….the men are coming!”  Once everyone was covered the double doors opened to a groom in his white dishdasha with the biggest smile you have ever seen spread across his face.  Entering with him was both the brides and the grooms immediately family and the band whom we had been listing to all night but whom we had never seen.  These men would be the only men allowed into the women’s party the entire evening.  Upon entering the groom walked toward his bride who was still sitting on the couch in the front of the room kissed her on the forehead and then hugged and accepted congratulations from the men in their families.  The men in the groom’s family had to immediately exit however the brides male relatives remained long enough to take family picture.

Food: At this point it was 1:00 in the morning when an announcement was made in Arabic and everyone began to stand up and move about.  We foolishly assumed that this meant the wedding was over so we gathered our things and began to make our way to the door.  The mother of the bride saw us heading in that direction and informed us that it was time for dinner and that everyone was just moving to a different ballroom where the buffet was set up.

We walked into the room with the buffet and were blown away with the amount of food that was being presented to us.

We proceeded to stuff ourselves on chicken, prime rib, sushi and shrimp.  We could have eaten there for a month and never be able to taste all the options.

The Bride and Groom even cut a piece out of it.

All in all in was a fabulous night.  I feel extremely fortunate to have been included in such an amazing opportunity to learn more about the Kuwaiti culture, and Jooles if you are ever looking for another plus one, count me in!

Please note, as fabulous as this event and the people were on this night we respected local custom and privacy by not taking pictures of the women while they were out of their hijabs and abayas.  Sorry that the only pictures you get are of three very happy American girls!