A few weeks ago, we took a little adventure to Mutlah Ridge, the highest point in Kuwait. It was about an hour drive from our house, towards the Iraqi border.  Finding the exact location was a bit tricky, because it’s basically located in the middle of the desert.

Part of the adventure was the drive out there!  We were exploring a new part of Kuwait that we haven’t discovered yet.  One of the best parts were the guys on the side of the freeway selling HUGE fireworks out of the trunk of their car!  We didn’t buy any (this time) but we will be making another visit out there soon.

Once we got out there, we started driving through the desert, in search for a nice little view point.  We found a ridge with an excellent view of the desert, the Persian Gulf, and Kuwait City in the background.  We just kind of chilled out, took some pictures, walked around, and enjoyed our time being surrounded by nature.  It was nice to get out of the city and leave behind the hustle & bustle, the honking, congestion, etc. of city life.

Rachel and Ethan enjoying the view.  It was nothing but sand and boulders for as far as you could see.

From our viewpoint, we watched a bunch of people in their 4×4’s dune bashing through the desert sand.  From old 4×4 jeeps, to brand new Range Rovers, we saw a wide variety of vehicles out there.  Occasionally one would get stuck, but quickly others would speed over and help pull them out.  There was even people ripping around on 4-wheelers and dirt bikes!

Ethan decided to do a little rock climbing out there.

After a couple of hours chilling out, we decided to take off and head back towards the city.  However as we were leaving the desert, we saw a guy on the side of the road who was renting 4-wheelers.  We all agreed, that this was going to be a great idea . . . . so we stopped!  After a bit of negotiating . . . . . . we were ripping around the desert on a bunch of Polaris (shout out to Roseau, Minnesota!) 4-wheelers through the desert.  We had them for an hour, and had a ton of fun!  Here are a few pics of our riding:

Mike and I getting ready to cruise up the sand dunes!

Ethan picked the 4-wheeler with the cool “cross bones” flag on the back.  Unfortunately, it was the wimpiest one! 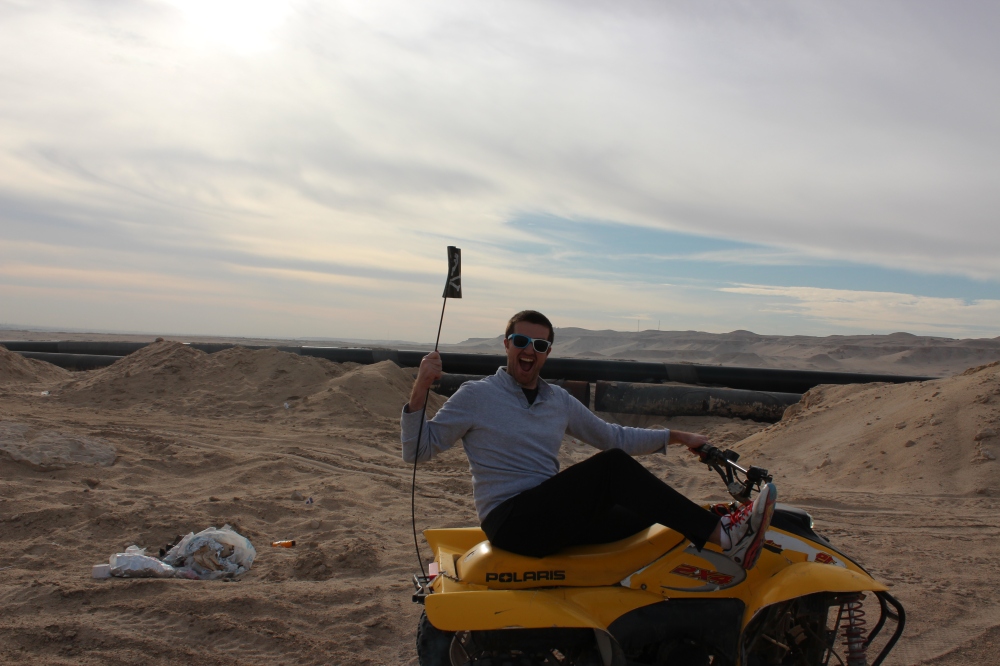 Rachel was having a blast!  They guy we rented them from tried to give her a smaller “safer” model because she was a girl, but little did he know . . . . she grew up in the woods and probably had more experience than us other three guys combined! 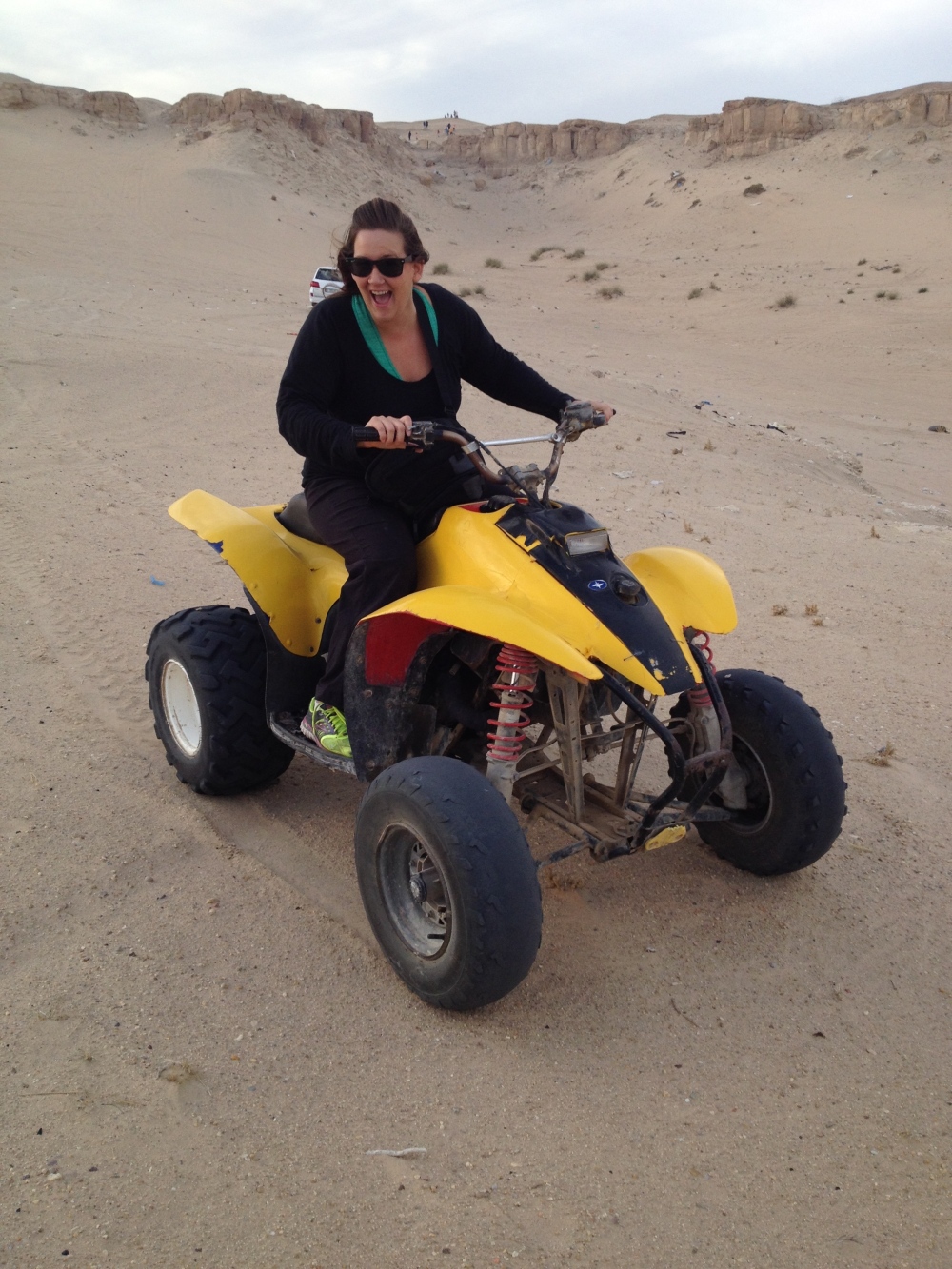 Out in the desert where we were riding, they were working on a new oil pipeline.  It was pretty crazy to see how big the pipe was.

The views at Mutlah Ridge can change every couple of days.  Anytime there is a strong breeze, the sand moves around and creates new ridges/dunes.

There was a bunch of other people out there enjoying their afternoons too.  A lot of families would spend the day have a picnic, grill out, then ride their 4-wheelers and buggies around.  Kids who looked as young as 4 years old were out ripping around by themselves, without even a helmet!

I was able to climb up this hill with my 4-wheeler, but if you look closely in the middle of the picture, Ethan’s got stuck and couldn’t make it up!

When we were done riding, we started heading back towards Kuwait City.  As we were heading down the highway, we ran into this mini little “4-wheeler gang” who were riding wheelies about 50 mph!

We had an awesome day out in the desert with friends!  Since we have been in Kuwait, I think we have done an excellent job of constantly searching for new and exciting things to do.  Our weekends are filled with adventures as we create memories with friends we’ll have forever! 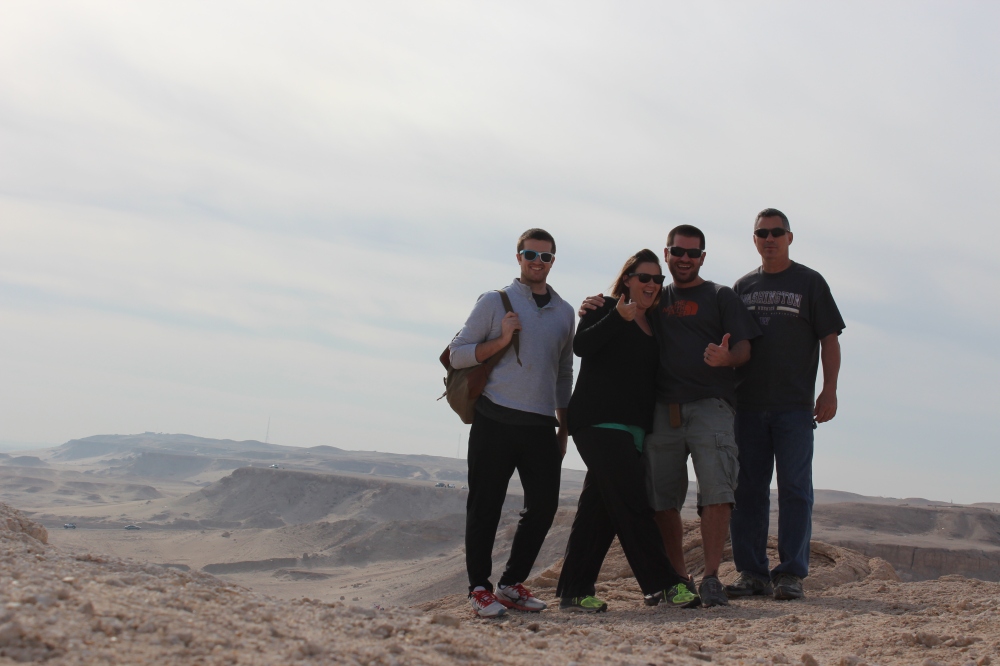