The first stop on our Christmas Vacation was Unawatuna, Sri Lanka.  Unawatuna, pronounced just as it is written una-wa-tuna, is a small beach town on the southern coast of Sri Lanka.  Nearly all of our teacher friends who recommended Sri Lanka to us, said we had to spend time in Unawatuna!

We heard it was the perfect spot to swim, lay on the beach, drink out of coconuts, and relax. 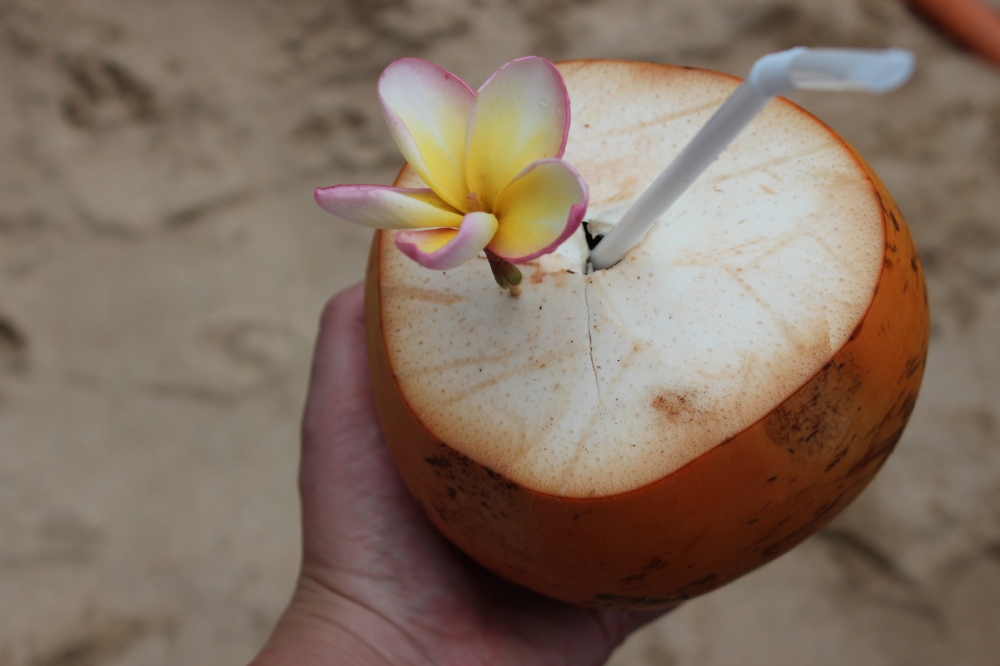 Unawatuna delivered on all of those promises and a few more that we weren’t expecting, like monkeys coming out from the jungle and checking us out during our breakfast.

We chose to stay at an Airbnb that was located “upstairs” in Unawatuna, a short Tuk Tuk ride up the hill from the beach into the jungle.   Our view was amazing, we were surrounded by jungle with a view of the Indian Ocean off in the distance.  So with a view like that, we spent as much time as possible sitting out on the deck and soaking in all the greenery that we have been desperately missing since we live in the desert.  On our second morning in Unawatuna, a brown adult male monkey decided to come and check out what we were up to while we ate breakfast on the deck. He swung his way from tree to tree and hopped right up onto the deck railing.  Even though the camera was sitting right on the table, Mitch was too excited by our visitor to snap any pictures.  The monkey stared at us for a few seconds before climbing the post on the deck to go to our friend’s Lauren and Adam’s deck to say hello to them as well.  Lauren and Adam were clearly aware that a monkey was nearby, as once the monkey started to make his way up to their deck, I began yelling like a crazy person: “MONKEY, MONKEY, LAUREN, MONKEY, ADAM, ADAM, ADAM, MONKEY.”  The nice part about my crazy yelling is that Adam reciprocated my crazed enthusiasm by answering with “MONKEY, MONKEY, HOLY SHIT, I SEE A MONKEY!”

After Mr. Monkey made his way across Adam and Lauren’s deck, I had composed myself enough to snap a couple of pictures, but none of them would truly do justice for how close this buddy had come to investigate what we were up to. Once he was at a safe distance from us, we heard a bunch of crashing in some nearby trees.  Soon after, Mrs. Monkey and her three babies emerged and followed him from tree-to-tree making their way deeper into the jungle.

The beaches here are great, the views are beautiful, but sometimes it’s an unexpected breakfast guest that makes the trip worth it.